Ultra running is like a staring contest.  The successful contestant is capable of tuning out the noise and distraction.  It is this kind of mental focus keeps a runner keeping on.  If no other experience before the Seaton Soaker 2014 proved this to me, then the Soaker makes the assertion undeniable.

After a year in hiatus, the Seaton Soaker 2014 was a new course that had us track across the Seaton hiking trail.  It is an out and back.  You start at 73 m elevation and gradually make your way to 153 m over 12.5 km.  There are 2 noteworthy climbs and three steep pitches.  The return is a little faster since the back is a net elevation loss.  The final 3 km of the back have the runner tracking down an alternate trail to the start and brings the runners through a river; hence Seaton Soaker.

The morning was perfect.  With such a beautiful morning you’d have thought that nothing could go wrong.  And…  your thoughts would have deceived you.  It all started right at the beginning of the race.  I finished my first kilometre and my calf muscles (especially my right calf) were so tight that running was laboured and forced; not fun at all.  As if that wasn’t enough, my right foot decides that it’s tired and falls asleep.  I tried to regain feeling in my foot by kicking my foot out and shake’n it about.  I must have looked like I was doing some kind of strange chicken dance or… the Hokey-Pokey.  After dancing around for far too long, I thought maybe loosening my shoe lace may help.  The situation did not get any better.  I was frustrated and close to the aid station at KM 7.  I stopped, removed my right shoe and sock and walked barefoot for a minute.  My foot was back in business so I put the shoe back on.  Though that was short lived.  With no other option, I ran with my shoes in my hands instead of on my feet.

By the time I got to the turn around (12.5 km), I had my shoes back on my feet since my city feet don’t have much in the way of calluses.  At any rate, I don’t think I really anticipated running the whole race without shoes.  That said, I was still able to keep an average running pace of around 6:00 minutes per kilometre.  Thankfully that was it for my foot trouble and I was able to maintain my pace much more comfortably.

On my way back to the start (to mark 25 km) there was a point when I was running with a group of 50k’rs.  As I noted earlier, there is a river crossing and at this point all crossings have been over bridges. Since it was an out and back and I had not seen the course map I was disappointed that it appeared there was no “Soaker”.  The running banter of the group made it apparent that they knew the course.  So I asked “Where is this epic river crossing?”  I was assured that we would cross the river twice.

I got to the race track, timed in for my 25 km split time and continued back to the trail.  It seemed like there was a little mix up as someone had picked up the flags that marked the trail that would originally ran on the way out.  Some runners headed back to the river.  One of the volunteers politely let me know the correct direction and so I was off.

I didn’t notice at first, my heart rate monitor (HRM) battery must of hit its end of life.  2 minutes before the split my HRM was reading two dashes, not helpful.  Panic started to set in.  How am I supposed to moderate on hill climbs?  How will I know if I have an even higher heart rate that previously thought (see Pick Your Poison 2014).  A flurry of doubt set in.  This is where the mental game is important.  It is just a piece of equipment that quantifies your body’s feedback.  Since I had run the race with the HRM I started to have confidence that I could moderate based on feel and experience instead of pure numerical data.

As I was tracking towards the turnaround point, I really started to notice that I was loosing my spunk.  I was following my nutrition routine and taking salt to make sure my muscles were in tip top shape.  Still I felt like I was fading.  From that point I was think about what they had to offer at the aid stations.  I needed a plan B and I needed it fast.  They had Heed, candy, chips, pretzels, and Coke!  I remember reading in the book, Lore of Running, that Coke serves as a great pick me up.  At the aid station at the turnaround, I pounded two cups of Coke.  And we are back.  From that point I stopped my Perpetuem diet and pounded a swig of good old Coca Cola Classic at each of the aid stations.

Not far from the turnaround point I peaked at my watch, 5:25 m/km, good.  Further along I looked down at my watch and I was impressed.  It seemed that for the last 2 km I was holding a 5:25 m/km pace.  I thought that was unbelievable.  Of course, it was unbelievable.  My watch froze, probably where I was on a flat or a slight decent.  My first thoughts were not kind.  I had some practice with equipment failure twice already so before panic set in, with colourful language I took the watch off and tossed it into my pack.  Now I was running au naturel.

As I turned to the river crossing I noticed I caught up to the first place female.  I was so happy to get to the river that I got down on all fours so that I could cool down my legs.  After my impromtu bath we ran together for the last 2 km.  Since it was a race, I figured that one of us should make an effort to pull in front of the other, so I managed to get 26 seconds in front of her.

I crossed the finish line 5th and I was the 1st place under male under 40.  I don’t think I could have done it if I let the obstacles get in my way.  Each time some trouble cropped up, I felt slight anxiety about it.  I never let that be the final thought or an easy out.  It really doesn’t matter where you place, so long as you keep keeping on.  Like a staring contest, focus on the objective and don’t let anything distract you. 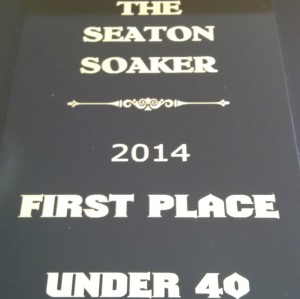